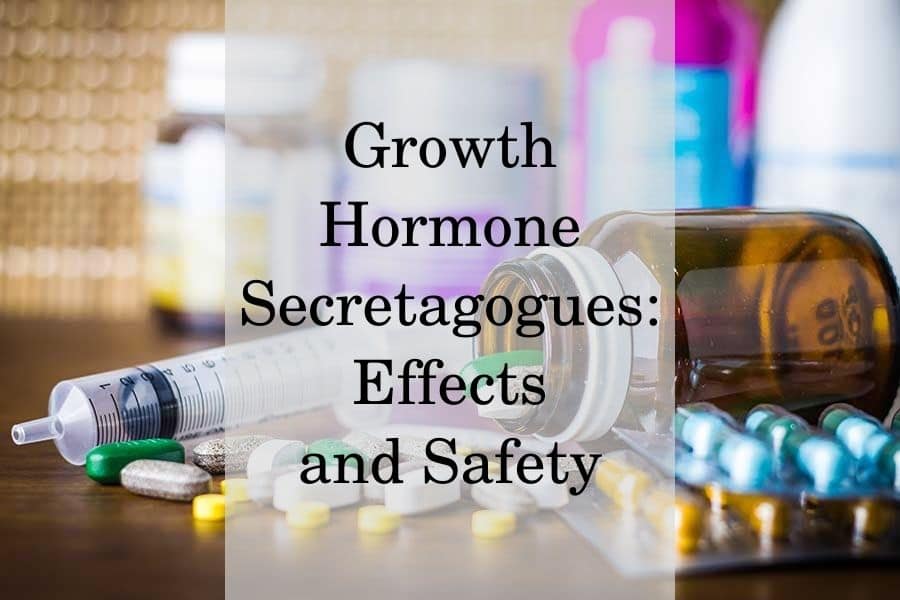 If you are exploring options to improve various health problems or your overall well-being, you may have stumbled upon medications called Growth Hormone Secretagogues (GHSs) or “peptides.”

GHSs are a group of compounds including peptides and other non-peptide molecules which can effectively stimulate your natural human growth hormone (HGH) synthesis.

HGH is a quite popular hormone amongst bodybuilders thanks to its potent fat-burning and anabolic benefits. That’s why increasing the natural HGH production in any way is a widely desired effect for people looking to improve their physique.

Yet, keep in mind that while some GHSs are FDA-approved, many of those medications are poorly studied, and there is a lack of long-term data regarding their safety and effectiveness.

Keep reading to discover the answers to all the questions you may have about these substances, including how researched GHSs are and what you should expect in terms of benefits and side effects according to the evidence.

The pituitary is the only gland in the human body that can produce HGH. That synthesis is regulated by several other hormones, but mainly two of the hormones produced by the hypothalamus – growth hormone-releasing hormone (GHRH) and somatostatin.

GHRH is the main factor that stimulates the pulsatile GH secretion in the pituitary and does so by activating the GHRH-receptor. On the other hand, somatostatin has counterregulatory effects and limits HGH synthesis.

Furthermore, both the pituitary gland and the hypothalamus have the so-called ghrelin receptors (GR). Ghrelin is known as the hunger hormone since the digestive system produces it to stimulate hunger and appetite via the GR in the hypothalamus.

But activating the GR in the pituitary gland also stimulates the release of HGH. That’s why the natural HGH secretion often spikes during fasting, and the hormone helps maintain stable blood sugar levels during this period.

What are growth hormone secretagogues?

GHSs are substances that mimic the function of either GHRH or ghrelin and trigger the corresponding receptors – GHRH-receptor and the GR. The latter is also known as the growth hormone secretagogue receptor (GHSR).

Triggering those receptors in the pituitary gland leads to the release of HGH. Depending on which receptor they trigger, GHSs can be divided into 2 main groups – GHRH analogs and ghrelin mimetics.

All GHRH analogs are injectable because the human gastrointestinal tract can easily destroy their peptide structure.

Injectable GHSs are taken subcutaneously, as this method is safe, effective, and easily performed by untrained individuals. Besides, it also allows for a slower release of the medication, increasing its half-life.

The duration of the effect depends on the half-life of the secretagogue and varies between 10 minutes to 7 hours. Usually, the peak in HGH levels occurs 30-60 minutes after administration and lasts from 2-8 hours.

Effects from GHS therapy occur relatively slowly. Depending on the GHS, studies report benefits after at least 2-4 months of use. Furthermore, most secretagogues must be dosed several times per day due to their short half-life, meaning that you may have to undergo multiple subcutaneous injections throughout the day.

Keep in mind that both GHRH analogies and ghrelin mimetics can’t increase your natural HGH synthesis above your physiological limits, which is controlled by somatostatin.

The majority of GHSs have been developed to diagnose growth hormone deficiency (GHD), treat growth retardation in children, or manage conditions related to various wasting states such as HIV and cancer. 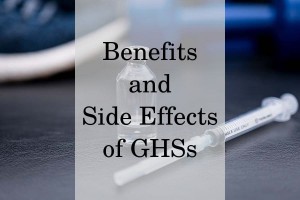 The main benefits of GHSs include increasing the frequency and the amplitude of HGH pulses. In addition, IGF-1 synthesis which is the main mediator of HGH’s anabolic effects, also increases during GHS therapy.

Studies in the elderly report that 1-2 weeks of therapy increases IGF-1 levels into the normal range for young adults.

GHSs are also often used by athletes and bodybuilders who aim to boost fat loss and improve their overall physique. Yet, current evidence does not support the effectiveness of most GHSs in improving weight loss.

Currently, only the GHRH-analog Tesamorelin has been consistently shown to reduce the amount of visceral fat when given to HIV patients. The other GHRH-analog, Sermorelin, appears to increase lean body mass without affecting fat mass, according to research.

For example, studies on Ibutamoren with younger and older individuals report a 5-7 lbs increase in lean body mass without affecting fat mass. On the other hand, the administration of Anamorelin in patients with cancer-related cachexia was shown to increase both lean mass and fat mass.

Studies on Ibutamoren reveal that this ghrelin mimetic may also improve sleep quality by extending the duration of REM sleep in both younger and older individuals.

Furthermore, Ibutamoren has shown potential benefits for improving bone health and recovery in elderly patients with bone fractures, but it was discontinued due to the potential risk of heart failure.

Ghrelin mimetics have also undergone studies for potential benefits in gastrointestinal dysfunction. So far, all GHS except Relamorelin has failed to show sufficient effectiveness. Relamorelin is still in phase 3 clinical trials for the treatment of diabetic gastroparesis.

But more important GHSs are not effective in treating adults with a GHD since the capacity of the pituitary gland to produce HGH is significantly decreased in these patients. Scientists report that peak HGH concentrations in GHD patients treated with GHSs tend to remain lower compared to healthy controls.

Yet GHRH analogs are rather well-tolerated, and the most common side effects include a transient increase in water retention, edemas, headache, muscle and joint stiffness, high blood sugar. What is more, ghrelin mimetics may even lead to a significant weight gain since activating the ghrelin receptor also increases appetite.

Therefore, the effects of ghrelin mimetics may vary from increasing lean body mass without affecting fat to increasing both fat and muscle mass. Many ghrelin mimetics are non-selective towards HGH synthesis, which can lead to an increase in other hormones as well, such as adrenocorticotropic hormone (ACTH), cortisol, and prolactin.

What’s the difference between HGH and peptides?

While GHSs stimulate the natural production of growth hormone by the pituitary, HGH therapy involves the administration of exogenous growth hormone, which has a structure that’s identical to the endogenous one.

Therefore, HGH therapy is much more reliable compared to GHSs in increasing growth hormone levels in individuals with pituitary dysfunction. HGH treatment is also currently the only FDA-approved therapy for GHD.

HGH therapy can successfully manage all the symptoms of GHD, and the first benefits usually occur after the first month of treatment.

Your natural HGH production is limited by regulatory hormones such as somatostatin. Therefore, even in healthy individuals, GHSs are not as effective in increasing HGH levels compared to injecting exogenous growth hormone.

The effects of HGH injections on body composition also appear faster since it is much easier to regulate the dose of HGH and therefore, the levels of growth hormone in your body.

HGH therapy has also been investigated much more thoroughly, and there is no risk of unexpected side effects which have been observed in GHSs.

Some patients may also consider taking both HGH therapy and GHS for maximizing the benefits – quick results within the first month of HGH treatment and extra benefits from GHS after 2-3 months.

Yet, simply increasing the dose of your HGH therapy with the approval of your doctor would have similar or better effects, without a risk of unexpected side effects.

Are HGH peptides legal and safe?

All HGH peptides were initially developed by pharmaceutical companies for the management or diagnosis of various conditions. Yet, not all of them have been approved by the FDA, while others have been discontinued following their approval.

Besides, even though most GHSs are not controlled substances, purchasing them requires a prescription.

Currently, there is no evidence that legal GHSs may increase the risk of other chronic conditions such as type 2 diabetes or cancer.

According to the latest reviews published in the scientific community, GHSs haven’t shown much promise in the management of gastrointestinal disorders and GHD. Yet, some GHSs appear to be safe and effective options for body composition management in chronic diseases.

The FDA has approved Sermorelin for the management of short-statistics in children and the diagnosis of GHD. EMD Serono initially manufactured it but then discontinued it due to production issues. Currently, it is available as a generic medication.

The FDA has approved Tesamorelin for the management of excess abdominal fat in HIV-infected patients with lipodystrophy. It is manufactured by the Canadian company Theratechnologies.

Several ghrelin mimetics currently have the status of investigational drugs, and some have requested FDA approval.

Anamorelin is manufactured by Ono Pharmaceuticals, based in Japan, and it is currently under investigation for the management of cachexia in lung cancer patients.

While most GHSs appear to have great safety profiles, some ghrelin mimetics such as Ibutamoren have been discontinued due to a possible association between the medication and the occurrence of heart failure.

Ipamorelin has also been discontinued due to a lack of effectiveness in improving recovery after bowel surgery.

GHRP-6 and GHRP-2 (Pralmorelin) are also currently not approved by the FDA. Therefore, these products are not manufactured by any incensed pharmaceutical company in the US, and any products available online are illegal. What is more, there is no guarantee for their quality and safety. 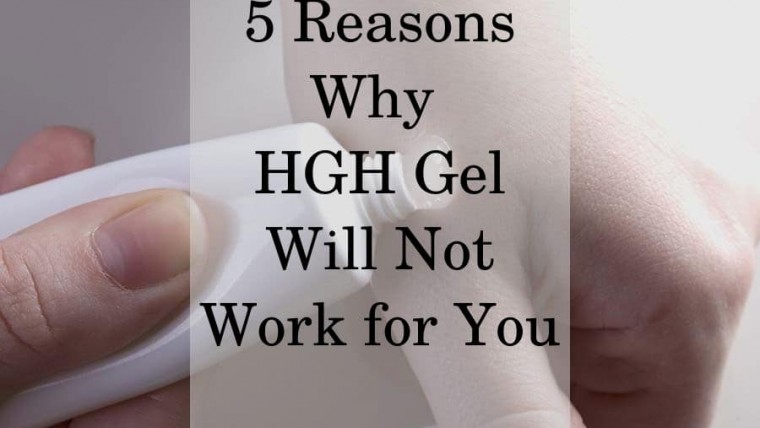 5 Reasons Why ALL HGH Gels Are Ineffective (and Probably Dangerous) 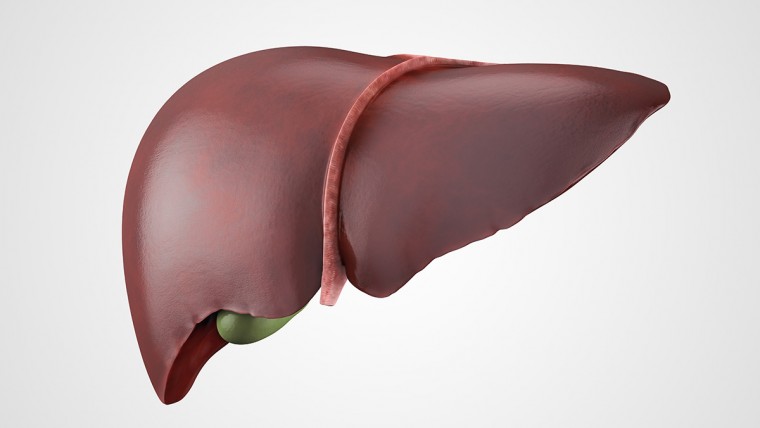 How HGH Can Repair The Liver?