The human growth hormone (HGH) plays a key role in maintaining normal vitality and masculinity in men. However, past a certain age, there is a natural decline in HGH levels.

Some males experience symptoms of growth hormone deficiency (GHD) such as loss of libido, vitality, muscle mass, and strength, whilst packing on extra belly fat.

In case of a deficiency, you should visit a qualified doctor who will diagnose you and decide if HGH therapy is the best path to addressing your symptoms.

What does growth hormone do for males?

Growth hormone is produced by the pituitary gland in both men and women. It is well-known for its role in regulating the growth of children and adolescents. However, adults need growth hormone too for regulating various metabolic processes.

The physiological GH levels in men are considerably lower compared to women, but at the same time, males are more responsive to the effects of the growth hormone treatment.

The hormone is released in a pulsatile fashion and its levels can vary greatly throughout the day. The normal levels in males are up to 10 ng/mL (450 pmol/L), but the HGH pulses become smaller and less frequent with age.

One of the GH functions in the body is stimulating the production of an insulin-like hormone in the liver called IGF-1. It is the main mediator of HGH’s anabolic effects. 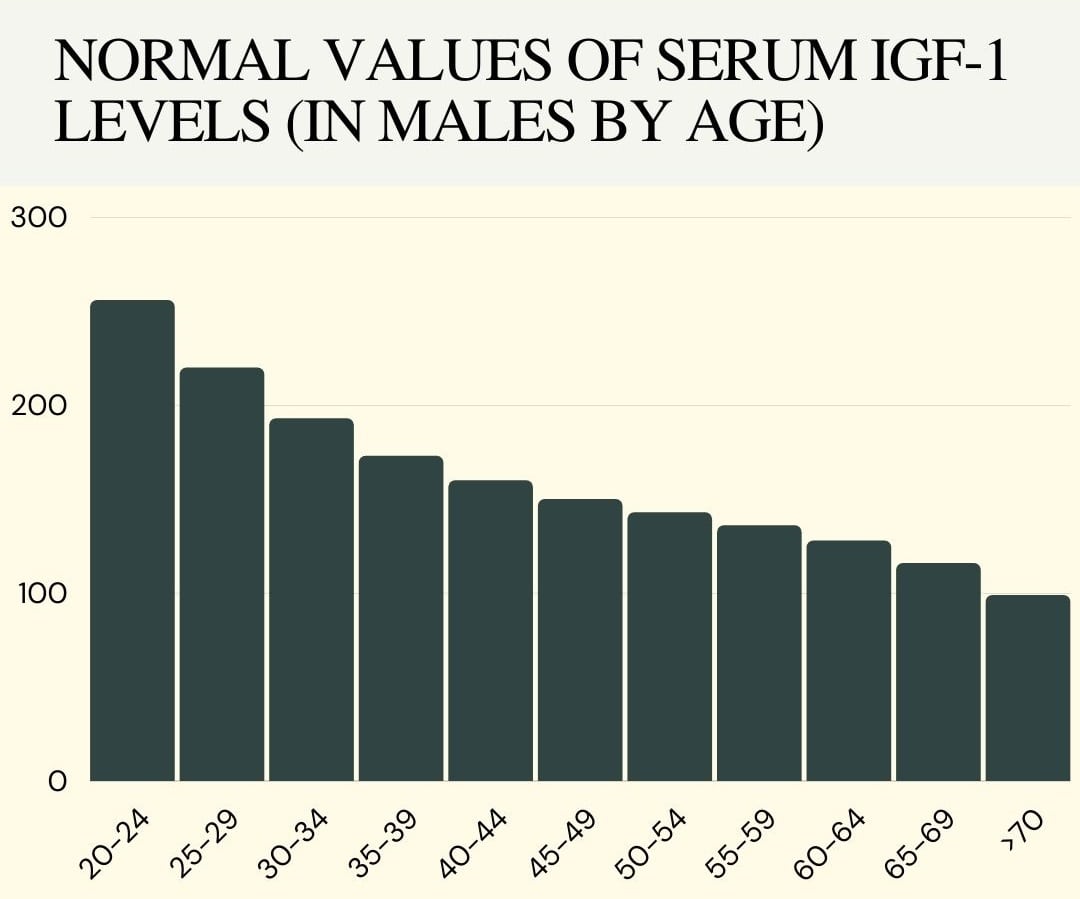 Furthermore, IGF-1 levels depend on the mean GH levels and don’t have the same pulsatile secretion. This has enabled scientists to estimate its normal ranges in men by age:

GH can help men maintain better body composition, thanks to its contrasting effects on muscle and fat tissues. The anabolic effect of the hormone stimulates protein metabolism and protects against muscle loss.

Besides body composition, HGH also has an impact on male potency and libido

Evidence has accumulated that there are receptors for this hormone in the reproductive organs. An in vitro study suggests that HGH may also influence the synthesis of sex hormones in the testicles.

Furthermore, small trials have shown that HGH might play a role in male arousal and the maintenance of a normal erection.

Growth hormone deficiency affects 1-3 per 10 000 adults according to statistics. There are 3 main types of GHD according to their causes and onset:

Almost all of the cases where GHD has its onset in adults are acquired and a tiny percentage are idiopathic. Idiopathic GHD has no apparent cause and it usually has its onset in childhood, with rare exceptions. The etiological factors which lead to an acquired GHD can be:

The only way to know for sure if you have HGH deficiency is to get examined and tested by an experienced doctor. Normally, the levels of GH in your blood constantly fluctuate and they can reach almost 0 without necessarily confirming a GHD diagnosis.

To properly diagnose GHD, suboptimal levels of HGH should be measured during a peak release. This is why GHD diagnosis requires a growth hormone stimulation test which involves provoking a peak release of HGH with the help of medications. The test has specific risks and contraindications, which is why it should be performed by qualified doctors only. The most common sign of GHD in men is the accumulation of fat around the waist coupled with a loss of muscle mass and strength. This type of fat gain can lead to a dangerous type of obesity, called visceral. The lipids can build up around the internal organs and release excessive levels of inflammatory molecules and triglycerides.

According to scientists the process speeds up atherosclerosis and increases the risk of metabolic diseases, including type 2 diabetes. Studies have confirmed that men with GHD are also at a higher risk of heart disease.

According to scientific evidence, GHD in males can also lead to decreased sexual desire and erectile dysfunction. Other symptoms can include depression and anxiety, osteoporosis, and chronic fatigue.

How safe is HGH therapy for men?

The daily administration of recombinant growth hormone as a prescription medication is called HGH therapy.

Inside your circulation, the recombinant HGH will produce identical effects to the endogenic HGH. Thus, it is completely safe for both males and females when prescribed by a doctor.

A physician will make sure that HGH therapy is safe and effective by strictly controlling the dosage. The initial dose is often as low as 0.2 mg of HGH per day, and then it is slowly increased until benefits are achieved without triggering adverse reactions. 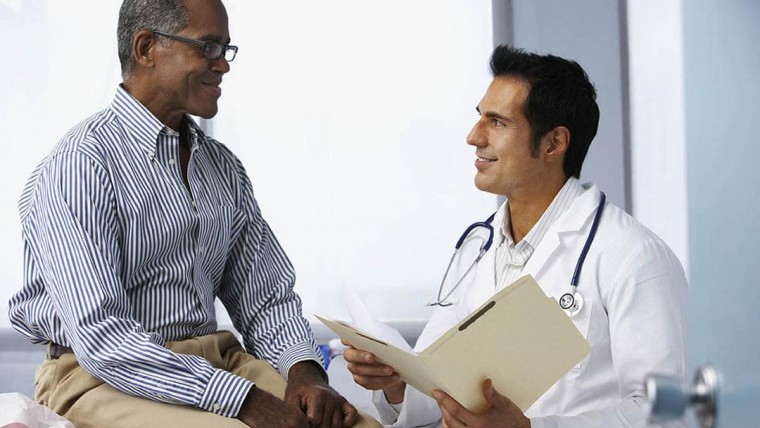 The only viable route through which HGH can get inside your system is via injections because of its delicate protein structure. It can’t be absorbed through the skin and once inside the digestive system it gets completely inactivated. Thus, any products marketed as gels or pills that contain HGH are 100% a scam.

GH injections are the only type of growth hormone therapy that is approved by the FDA. Besides, you can’t purchase true HGH-containing products without first obtaining a legal HGH prescription. On the contrary, most HGH pills or gels are often marketed as homeopathic products or herbal supplements and sold without a prescription.

Benefits of HGH therapy for men

HGH can have multiple benefits for men according to studies:

HGH therapy might also have the potential to improve erections according to an experimental setting in humans. However, having realistic expectations from GH is important for preventing any frustration or disappointment in patients.

The benefits of growth hormone therapy occur gradually and it can be a month before you notice the first improvements. In fact, it might take up to 6 months to achieve most of the positive effects.

Here is what to expect from HGH therapy during the first months, according to the different trials:

1st month –  IGF-1 peaks the highest during the first month of the therapy. This might provide benefits for cell regeneration, hair growth, and muscle mass.
3rd month – There is a notable increase in muscle mass and a reduction in abdominal fat mass. Cholesterol levels are also improved.
6th month – Body composition is further improved. Trials report that 6 months after starting HGH therapy there is a significant improvement in the quality of life, mood, and energy levels. Furthermore, studies that lasted for 6 months also noted an increase in bone formation and density in men.

Why do side effects may occur?

Growth hormone injections can also cause some side effects which are more pronounced with higher doses.

For example, water retention is a common side effect during HGH therapy especially when high doses are being used. It usually manifests with swelling in the hands and the feet. Furthermore, water retention may cause discomfort in joints and muscles. Some patients experience carpal tunnel syndrome, which is caused by swelling of the soft tissues around the wrist. This results in crowding and entrapment of the nerve within the carpal tunnel.

The symptoms include pain, numbness, tingling sensations, and weakness in some of the fingers of the hand including the thumb. All of these side effects go away after lowering the dose.

Headache is also a common side-effect that might occur if the dosage is too high. It is caused by increased production of cerebral spinal fluid and elevated intracranial pressure. The effect is once again temporary and usually goes away after a couple of weeks or lowering the dose.

HGH treatment might reduce insulin sensitivity, but according to trials these effects are non-permanent and by 3 months, the metabolic parameters return to baseline.

Furthermore, evidence suggests that HGH therapy is not likely to increase the risk of type 2 diabetes

Products labeled as HGH pills or HGH gel might also cause adverse reactions, but those are not related to any of the GH effects. These products do not contain any GH and it would not reach inside your systemic circulation.

The adverse reactions caused by these products are almost always unpredictable and might originate from various inactive ingredients, fillers, preservatives, or herbal extracts. Men are more responsive to growth hormone when compared to women. GH treatment may be the best option in addressing symptoms caused by low growth hormone levels.

However, HGH therapy should be prescribed by a qualified doctor, only after proper testing and diagnosis. Besides, the dosage must be closely controlled by an experienced physician to ensure it’s safe and well-tolerated.