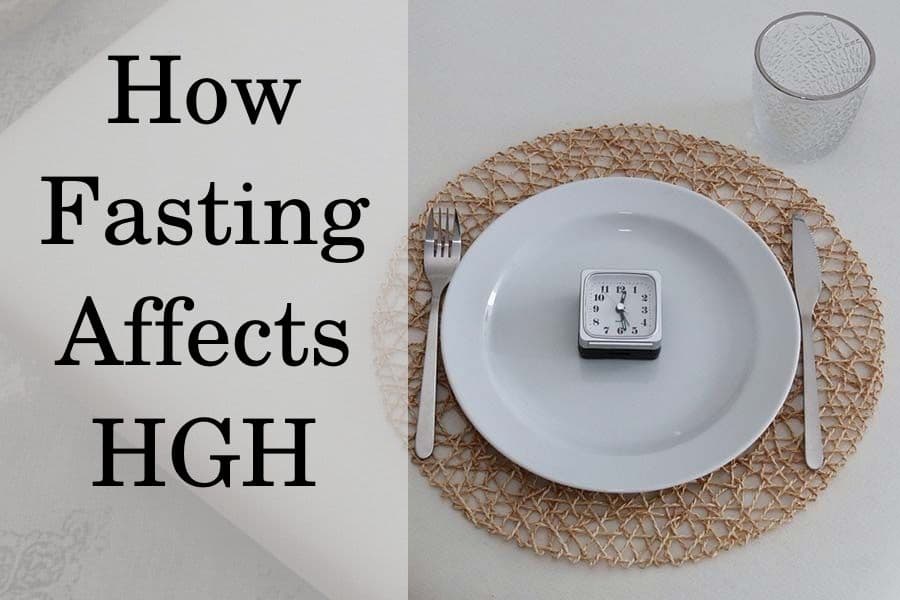 If you’ve been looking for natural ways to boost your growth hormone (HGH) levels, then you’ve likely heard by now that fasting may help. In fact, some studies have shown that 5 days of continuous fasting may increase HGH levels up to 10-fold.

To put it simply, HGH increases during fasting because of its role as a stress hormone. The growth hormone helps your body tap into its fat stores for energy and counteracts the function of insulin, which ultimately lowers the risk of hypoglycemia during fasting.

But there is a catch. Despite the fact that fasting may increase your growth hormone, it actually suppresses the anabolic effects of HGH. That’s because fasting lowers the sensitivity of your cells towards HGH, and decreases its main anabolic mediator called Insulin-like growth factor 1 (IGF-1).

Thus you will not experience the benefits of increased HGH on muscle mass, energy levels, etc. On top of that, the increase in HGH is short-lived and may occur only in healthy individuals.

People with diseases that affect the normal function of the pituitary gland such as growth hormone deficiency (GHD) cannot boost their GH levels and reduce their symptoms with fasting.

How does fasting affect HGH?

Intermittent fasting is arguably the most popular method of fasting and one of the most common diets in the US. One survey showed that about 13.7% of all people following a specific diet were fasting intermittently.

There are 3 main types of intermittent fasting:

16:8 is the most common and least aggressive form of daily restricted feeding which involves 16 hours of fasting and 8 hours of food intake. 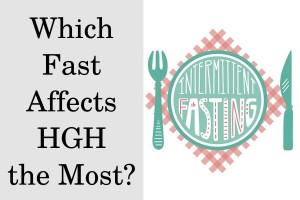 The period of complete fasting can also be defined as water fasting or dry fasting, depending on whether you are allowed to drink water and calorie-free beverages during the fast.

The amount of growth hormone released during fasting appears to increase gradually with the duration of the fast. Since water fasting can be safely maintained for longer than dry fasting, theoretically it should be a better strategy for boosting HGH.

Besides, regimes that include fasting for a whole day are going to result in a larger increase in GH levels than less aggressive regimes such as 16:8. That is as long as regimes such as alternate day fasting include complete calorie restriction rather than limiting intake down to 500 kcals.

For example, studies report that following a 16/8 restricted time feeding for 4 weeks regime led to no changes in average GH levels.

On the other hand, one study showed that fasting completely for 48 hours can lead to a 5-fold increase in the total daily GH levels produced by the pituitary gland. Another trial went even further and reported a 10-fold increase after 5-days of starvation.

Intermittent fasting can also be a successful strategy for weight loss. Reducing body fat in overweight and obese individuals can help increase GH levels in the long term.

Does fasting stimulate the pituitary gland?

The exact way via which fasting induces HGH synthesis by the pituitary gland is still unclear. The 3 potential mechanisms discussed by scientists include:

The first possible mechanism is that the drop in insulin levels during fasting triggers the release of GH as a mechanism against hypoglycemia. Normally insulin acts as negative feedback for the HGH synthesis by the pituitary gland, so its decrease during fasting is the most likely trigger.

Another mechanism could be the decrease in IGF-1 levels during fasting which is known to act as feedback for HGH synthesis. The result is increased growth hormone production in an attempt to maintain normal IGF-1.

However, researchers reveal that paradoxically, fasting reduces the sensitivity of tissues towards growth hormone-induced IGF-1 synthesis and IGF-1 levels remain reduced for the duration of the fast.

Since IGF-1 is the main anabolic mediator of HGH, fasting appears to decrease the anabolic effects of growth hormone despite the apparent increase in GH levels. Therefore, the increase in HGH won’t help you build muscle or prevent the loss of muscle mass during fasting.

Apart from losing weight and increasing the natural GH synthesis, fasting is also often performed in an attempt to increase a process in your cells called autophagy.

It is a natural process that involves removing waste from the cell, as well as recycling damaged components. This process is thought to play a preventive role against the development of diseases such as cancer.

Unfortunately, the process of autophagy has been investigated mainly in animal trials, so its benefits in humans haven’t been confirmed yet.

Besides, fasting is one of the strategies which patients may employ to speed up the process of autophagy. Yet, the researchers also highlight that other forms of caloric restriction may be equally effective when compared to fasting.

In order to preserve stable blood sugar levels, the body increases levels of hormones that counteract the function of insulin such as HGH and cortisol. This also results in reduced insulin sensitivity.

Yet, intermittent fasting can be a successful strategy in improving insulin sensitivity in the long term, as long as it leads to body fat loss.

That’s because obesity is considered one of the main risk factors for developing pathological insulin resistance. Intermittent fasting helps prevent that in the long term by creating a caloric deficit and supporting weight loss.

Long-term studies also show that when the total amount of energy taken with food is the same, the weight loss is also the same regardless of whether intermittent fasting was employed or not.

Therefore, the size of your caloric deficit rather than how long you fast is the most important factor that determines the total benefit of any diet for your insulin sensitivity.

How to make fasting more effective

The effectiveness of fasting for increasing growth hormone levels in the short term depends on the duration of the fast, with longer fasts such as in the case of alternate-day fasting leading to more spikes in growth hormone production.

However, alternate-day fasting is also a rather aggressive approach, since it involves fasting for more than 24 hours every other day.

Drinking water and other calorie-free beverages are a must during these periods to minimize the health risks. For example, tea or coffee that is free of milk, sugar, honey, or other ingredients with calories do not break the fast or prevent the increase in growth hormone.

Nevertheless, such prolonged periods of fasting may be unsafe for people prone to hypoglycemia as well as those with chronic diseases.

There is a long list of contraindications against fasting. A non-exhaustive list includes pregnancy, breastfeeding, childhood and adolescence, diabetes, acute and chronic gastrointestinal diseases, being underweight, fertility problems in women, and hypotension (low blood pressure).

How long to fast for the best results?

Currently, there hasn’t been an optimal fasting time for the highest increase in HGH. Considering the typical daily changes of HGH in healthy individuals, fasting throughout the night as well as the morning may be most optimal. This is the time when the highest peaks in growth hormone usually occur. 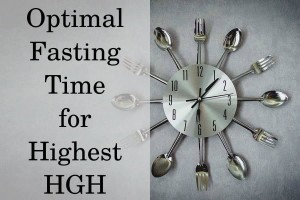 Fasting 16 hours or less does not appear to reliably increase GH levels. Therefore, intermittent fasting strategies which aim to boost growth hormone synthesis should aim for longer fasts, such as 18:6, 20:4, 22:2 (warrior diet) and alternate-day fasting.

Keep in mind that while these regimes may help with weight loss, your IGF-1 levels will decrease, making you more likely to lose muscle in addition to fat.

In addition, your HGH levels will be suppressed as soon as you break the fast. Therefore the longer the period between your meals – the more and higher HGH peaks you may experience.

Unfortunately, fasting is not a successful strategy for increasing GH levels in patients with growth hormone deficiency.

Furthermore, patients with GHD who take HGH injections while fasting do not experience higher growth hormone levels than those who eat regularly, but it may prolong the effect.

One study reports that people taking HGH injections while fasting had lower metabolic clearance for growth hormone, meaning their GH levels remained elevated for longer. Patients also experienced higher insulin resistance, although it is important to mention that the trial was conducted in healthy individuals with normal growth hormone secretion.

That’s because GHD patients cannot produce their own growth hormone, and their HGH levels depend mainly on the dose of the medication.

With that being said, taking HGH injections while fasting appears to be safe, as long as the patient does not have any of the contraindications we already mentioned.

Therefore, it is best to consult with a medical doctor before attempting any diet including intermittent fasting, especially if you have a chronic condition or you are taking prescription medications. 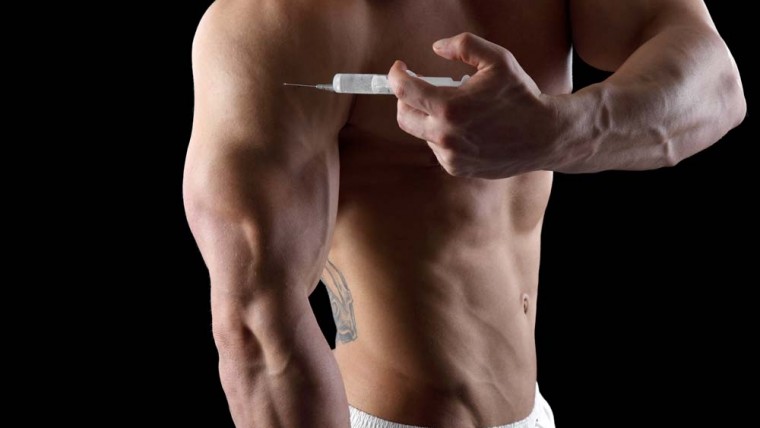 Is HGH a Steroid?