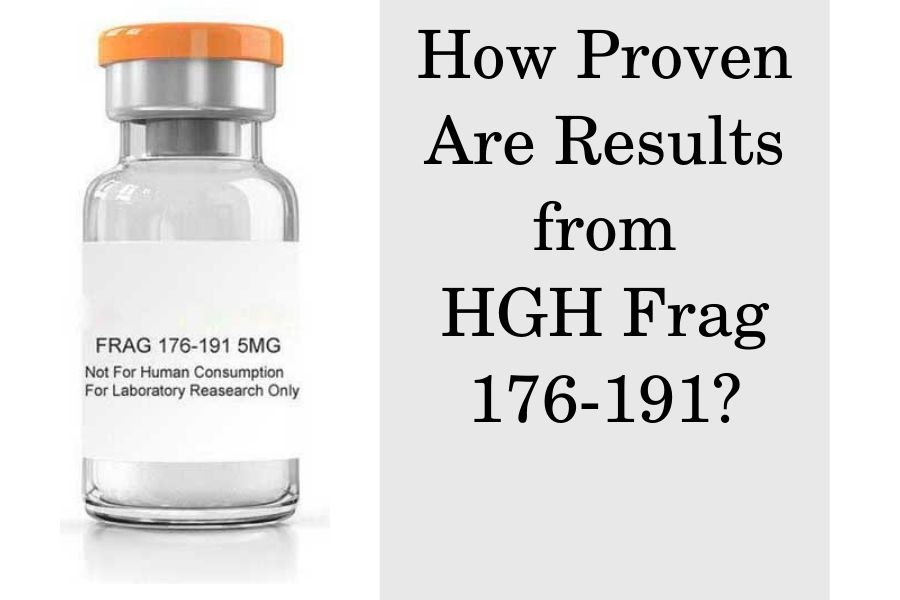 It has the reputation of an anti-obesity drug because it’s made from the terminal part of the HGH molecule. That’s the fragment that possesses specifically the fat-burning properties of the hormone.

Thus, AOD 9604 is supposed to speed up weight loss without increasing IGF-1 or insulin resistance.

Despite the fact that many sources on the internet may claim that HGH fragment 176-191 is a safe and FDA-approved peptide, the reality is that it is not sanctioned by a single government health authority in the world.

In fact, the development of this drug was terminated in 2007 due to ineffectiveness and it’s never been manufactured or distributed for therapeutic use. Currently, the peptide can be used for research purposes only.

Scientists found out that different parts of the HGH molecule possess different effects.

Out of all 191 amino acids, it was determined that only the last 15 amino acids are the ones mediating the fat-burning properties of the hormone. The fragment was initially named HGH 177-191 or AOD 9401.

Researchers modified the peptide by adding tyrosine to help stabilize the molecule which led to the production of a 16-amino acid fragment called AOD 9604. This made the HGH frag 176-191 more stable and orally active, unlike most other peptides.

AOD 9604 has been studied mainly in animal trials involving mice and rabbits. One of the most prominent experiments involved large oral doses of the peptide in obese Zucker rats. This led to a 50% bodyweight reduction in just 19 days.

Yet, the fragment lacks any other of HGH’s effects including increasing IGF-1, insulin resistance, or cell proliferation. Thus, the compound lacks the muscle-preserving and anabolic effects of growth hormone.

Unfortunately, clinical trials with humans are extremely scarce and since the medication was discontinued, the original reports are mostly unavailable.

According to researchers who have had access to some of the data, the first randomized clinical trial with AOD 9604 reported up to 2.6 kg of weight loss in obese individuals. The participants took the peptide daily for 12 weeks in the form of oral capsules. Interestingly, lower doses were more effective.

Thus, the HGH fragment 176-191 may be able to burn fat relatively fast and produce small weight loss within 3 months.

Yet, the scientists also report that a larger study in 536 subjects failed to find any significant weight loss after 24 weeks of daily AOD 9604 use, which led to product discontinuation.

More on the topic: Weight loss results on HGH

Growth hormone affects the activity of several enzymes called lipases which prevent the fat from returning back into your adipose tissues.

HGH frag does not affect the natural HGH production and it does not act as a growth hormone secretagogue. It will not affect your hunger levels or increase your appetite.

Animal studies, comparing the effect of 250 mg/kg/day of AOD9604 and 1 mg/kg/day of HGH for 14 days report different results in lean and obese mice.

In lean mice, HGH but not AOD 9604 or placebo resulted in increased lean body mass. Thus it appears that HGH Fragment 176-191 is not effective in building muscle.

In obese mice, both HGH and AOD 9604 resulted in weight loss. The scientists reported a 40% reduction in adipose tissue in the HGH group vs 28% with AOD 9604. 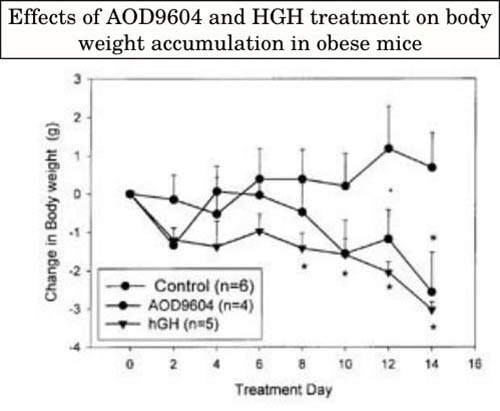 Contrary to what most online sources may suggest, experiments reveal that HGH fragment 176-191 is less effective than HGH in burning fat.

According to anecdotal evidence, AOD 9604 benefits may also include small improvements in cholesterol levels and insulin sensitivity.

Recently, AOD 9604 was also suggested as a potential treatment for osteoarthritis

Preliminary evidence from animal experiments showed that injecting the peptide into the joint may stimulate cartilage regeneration and connective tissue repair. However, human studies are lacking.

Currently, the peptide is studied for effectiveness in pain management under the name LAT 8881. However, preliminary results do not appear promising.

HGH frag 176-191 has shown a great safety profile in animal studies. Long-term oral use was well tolerated by rats, pigs, and monkeys.

Researchers also report that the peptide has not caused any serious side effects in the few clinical trials performed up to date.

The medication has been administered either via intravenous infusion or as oral capsules. Some of the adverse reactions that were possibly related to the peptide were headache, chest tightness, palpitations, and euphoric feelings

Since AOD 9604 doesn’t raise IGF-1 and lacks the mitogenic activity of HGH, it may be safe in patients with malignancy. Increasing the risk of cancer is also unlikely due to the lack of mitogenic activity. However, its safety has not been evaluated in such cases yet.

Furthermore, it is unclear whether AOD 9604 can cause any other side effects such as hair loss, fatigue, etc.

HGH fragment 176-191 has never been manufactured for therapeutic use by any pharmaceutical company. It has been used for research purposes only and then discontinued. 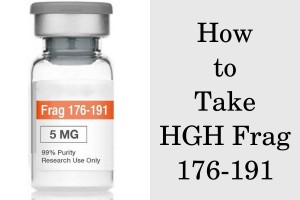 Therefore, any products available on the internet are not regulated for quality. There is no guarantee of the safety and effectiveness of such products.

It’s best to avoid using fragment 176-191 or other non-FDA-approved peptides.

The limited evidence from human studies has only investigated the safety of intravenous infusion and oral administration.

However, the peptide is often used by athletes and bodybuilders as subcutaneous injections, in an attempt to burn fat and cut weight more easily. Subcutaneous use of HGH frag 176-191 has never been studied on humans.

Furthermore, it’s sometimes used in stacks with other peptides which are supposed to increase its effectiveness. Yet there is no official information on the safety and effectiveness of such combinations.

Currently, there are no official recommendations on how to store such products properly either.

According to the official safety data we have, AOD 9604 has been used safely during research as an intravenous infusion in doses ranging from 25 μg up to 400 μg per kilogram of bodyweight.

In one of the studies which showed some weight loss benefits, the lowest dosage (1 mg/day) was much more effective when compared to higher doses (5-30 mg/day) or placebo.

As an illegal performance-enhancing drug, HGH fragment 176-191 is usually available as vials containing 5 mg lyophilized powder which has to be reconstituted with bacteriostatic water and injected subcutaneously.

However, there is huge variation between the different recommendations since they are based mostly on illegal use and anecdotes. Most sources recommended doses of 250-350 μg taken 1-3 times per day. 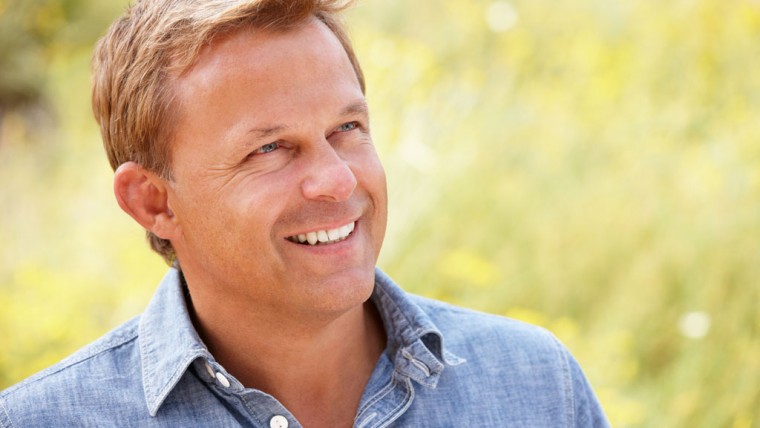 What Does HGH Do For Muscle Growth?

The Difference Between HGH and Sermorelin