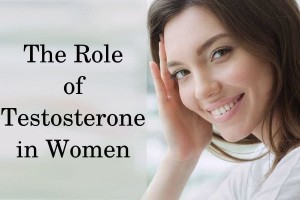 Despite being called the “male sex hormone”, testosterone (T) is also present in the female body. In fact, its importance in sexuality and healthy aging may be no less than that of the typical female hormones such as estrogen.

The role of T in women’s health begins since puberty, as it stimulates the development of sexual characteristics such as axillary and pubic hair growth.

Thus, insufficient T levels can have a detrimental effect on your sexual and mental health. On the other hand, high testosterone can lead to serious conditions such as infertility, acne, balding, deepening of the voice, facial hair growth, etc.

Therefore, T levels should be balanced within a specific physiological range that ensures healthy aging and good quality of life.

Normally, the female body synthesizes about 200 mcg of testosterone per day on average. 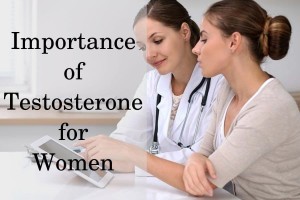 T and its precursors are produced mainly by the ovaries and adrenal glands. Later, these precursors also get transformed into T in the peripheral tissues.

One of the most notable examples is the dehydroepiandrosterone (DHEA) which is mostly synthesized by the adrenal glands. DHEA and T on the other hand can get transformed into estrogens (E), via an enzyme called aromatase.

Furthermore, T and E levels are also linked by the same transporter in the human body, called sex hormone-binding globulin (SHBG) which keeps them in an inactive form.

The molecule has a much higher affinity for T than E. If your estrogen is elevated, the corresponding increase in SHBG binds, inactivates, and lowers testosterone.

Testosterone is often feared as a factor that may increase the risk of cardiovascular disease (CVD). But the risk is actually related to low SHBG rather than high T levels.

Furthermore, studies show that low testosterone and DHEA are associated with an increased risk of atherosclerosis in postmenopausal women.

Scientists also report that T and DHEA levels slowly but inevitably decline with age which may lead to an increased CVD risk. Indeed, the decrease in DHEA is an independent risk factor for CVD in female.

The importance of testosterone in healthy aging is also related to maintaining your bone health, cognitive functions, and sexual wellbeing.

Furthermore, higher E and T levels in women are associated with better verbal memory and other cognitive parameters.

Research also reveals that younger females with lower levels are more likely to experience higher levels of pain during their menstrual periods.

Evidence on females with low libido does not consistently show that the condition is linked to low T.

Despite that, in pre- and postmenopausal women increasing T appears to significantly increase desire, subjective arousal, and vaginal blood flow, and frequency of orgasm.

If you suspect that your T levels are imbalanced then make sure to visit a medical doctor such as a specialist in endocrinology or gynecology. Your consultation will normally begin with taking your medical history and physical exam.

Furthermore, your doctor will assign you tests that will reveal your T levels including total T, free T, SHBG, luteinizing hormone, follicle-stimulating hormone, prolactin, and others.

Keep in mind that your T levels depend on multiple factors including your age and menstrual cycle. Normal levels in women by age are: 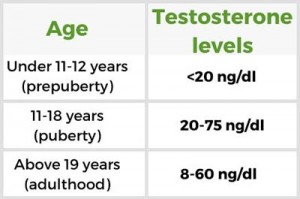 The levels of testosterone that is not bound to SHBG or other transporters, aka your free T levels should be within 0.06-1 ng/dl.

If your symptoms and tests suggest that your T is too high, your doctor will have to identify the exact reason for your condition before suggesting appropriate treatment.

On the other hand, detecting and diagnosing low T in women is much more complicated.

There is insufficient evidence correlating testosterone levels with specific signs or symptoms in females and therefore a lack of a well-defined low T syndrome in females.

Furthermore, there is a lack of standardized and accurate assays for measuring T at the low levels found in women.

Causes of high and low T in women

Medical conditions that can cause high testosterone in women are:

The most common cause of high T in females is hyperinsulinemia, usually related to PCOS. The insulin directly stimulates the production of T by the ovaries while simultaneously lowers SHBG and increases free T.

Despite the fact that T drops in postmenopausal women, many may experience symptoms of high T

Research suggests that E and SHBG drop rapidly during menopause while T remains mostly unchanged. This leads to a relatively higher T and symptoms.

One of the rarest causes of high T is the occurrence of tumors such as luteoma during pregnancy.

Evidence reports that luteomas produce high levels of progesterone and testosterone and may lead to symptoms of high T in about one-third of all cases. The condition does not require treatment and resolves spontaneously after the end of the pregnancy.

Medical causes of low T in women include:

Surgical menopause is the most common cause of low T in women and the condition leads to significantly lower levels than in naturally menopausal females.

The condition occurs after the surgical removal of the ovaries, which is often life-saving in case of increased risk of estrogen-dependent cancers such as breast and ovarian cancer.

Signs and symptoms of testosterone imbalance in women

The most common signs and symptoms of high T in women are:

The development of male characteristics such as hirsutism, deeper voice, and enlarged clitoris is known as virilization. If the condition advances, these changes may become irreversible.

The elevated T in conditions such as PCOS also leads to problems with the menstrual cycle and infertility. Furthermore, it is often associated with weight gain, insulin resistance, and high blood sugar in females, especially those suffering from PCOS.

However, evidence suggests that weight gain usually predates the increase in T. It causes insulin resistance, high blood sugar, and lower SHBG levels. Therefore high testosterone is the effect, rather than the cause of weight gain and hyperglycemia.

On the other hand, the symptoms of low T in women are much more subtle and unspecific. They may include:

Women who undergo surgical menopause experience a rapid decline in both estrogen and testosterone levels after the removal of the ovaries. This can lead to a sudden drop in libido, depressed mood, hot flashes, and night sweats.

Furthermore, both low T and E in females may increase the risk of neurodegenerative diseases such as Alzheimer’s. Yet, we need more research before we can suggest that low T can cause dementia.

How to restore the balance of your T levels 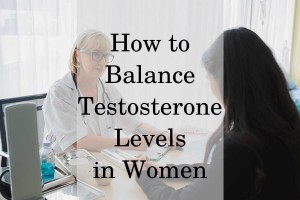 The best way to restore your testosterone levels back to normal ranges and manage your symptoms is to follow the recommendations of a medical professional.

If your T is too high, your doctor will best determine the cause of your complaints and assign you proper therapy. The main methods to lower testosterone in women include medications and lifestyle changes.

The most commonly prescribed medication treatment is low-dose estrogen-based birth control therapy. It works by increasing the levels of SHBG in your body, which binds and inactivates testosterone.

If hyperandrogenism is accompanied by hyperinsulinemia such as in PCOS, then adding metformin to the therapy is highly recommended. The medication is a standard treatment for type 2 diabetes due to its effectiveness in increasing insulin sensitivity.

In contrast, there is still no medication or treatment method approved for therapy in women with low testosterone.

The best way to manage it is to manage the underlying conditions, such as anorexia, hypopituitarism, HIV/AIDS, or cessation of the medication therapy that led to the condition if possible.

The use of exogenous T in the form of testosterone replacement therapy (TRT) is currently not approved for use in females. Nevertheless, some doctors may prescribe a trial of low-dose TRT in postmenopausal women with low T or sexual dysfunction.

According to the official guidelines, this should happen only after careful evaluation of the risk for side effects, proper diagnosis of hypoactive sexual desire disorder, and continuous monitoring of the changes in your T levels.

How to keep T levels in balance

If you are at an increased risk of endocrine conditions that may lead to high T such as PCOS, then you should consider undergoing regular checkups.

Your doctor will monitor different parameters, such as your insulin sensitivity and testosterone levels which will help you take timely measures to keep your hormones in balance.

There are several lifestyle changes that may reduce your risk of high T, with the most effective ones being reducing abdominal fat and increasing physical activity.

The best way to do that is by following a balanced and diverse diet based on whole foods. This will help you stay satiated for longer and consume fewer calories.

Foods that act as natural testosterone suppressants include spearmint and licorice as well as sources of inositol and omega 3 fatty acids.

On the other hand, there are no methods to prevent the natural decline with age and the occurrence of menopause. Instead, symptoms may be improved by reducing stress, improving sleep, and visiting a sex therapist.

In addition, the precursor of T, called DHEA is available as an over-the-counter supplement. Studies report that supplementation is effective in increasing both testosterone and estrogen in postmenopausal women while reducing SHBG. However, the safety of long-term use (longer than 12 months) is uncertain.