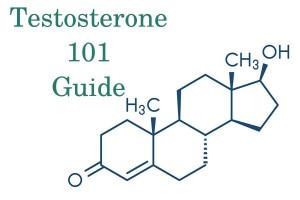 Testosterone is shrouded in misconceptions. Although it’s “the male sex hormone” researchers still do not fully understand its role in erectile function in men.

On the other hand, women also have testosterone, and the hormone appears to be equally important for their sexual health and overall well-being. That is why testosterone problems can affect both genders.

For example, obesity can lead to abnormalities in both men and women. Obese men usually suffer from low T, while obese women may be producing too much testosterone and develop symptoms of hyperandrogenism.

If you have any complaints that could be related to your T levels, make sure to consult with a medical specialist. Keep reading to discover the most important information about the role of T in your body, related health problems, and their treatment.

What does testosterone do?

Testosterone is a steroid hormone with anabolic and androgenic effects. It produces these effects by binding to the androgen receptors found in most of your tissues, including muscle, bone, skin, and reproductive organs.

In both men and women, the anabolic effects of T help maintain bone density and muscle mass. Besides, its androgenic effects stimulate the development of secondary sexual characteristics during puberty, such as pubic and axillary hair growth.

Furthermore, the hormone regulates sexual desire and mood in both genders.

In men, T also stimulates the development of the male reproductive system and the growth and maturation of spermatozoids. The hormone is produced by the testicles and, to a smaller extent, by the adrenal glands.

In women, T is mainly produced by the adrenal glands but also by the ovaries. The placenta can also produce testosterone during pregnancy.

How do T levels change with age?

Either too high or too low T levels can lead to health problems in both genders. That’s why it’s essential to maintain your testosterone levels in an optimal range.

For adult men, this range is between 300-1000 ng/dL, measured in the morning when the natural synthesis is at its peak. Women have about 20 times lower T levels or about 8-60 ng/dL.

Testosterone levels peak during puberty for both men and women. In this period, it leads to sexual maturation in men and the development of specific axillary and pubic hair in both genders. 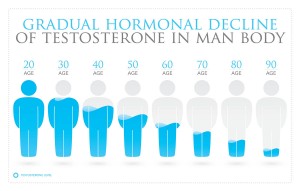 Once you are past your 30s, T levels inevitably begin to decline. Yet, the decline in women is much slower than in men and may become noticeable only after menopause.

The most common testosterone abnormality in men is hypogonadism. It is a condition that involves low T levels and symptoms.

If the testicles can’t produce adequate amounts of testosterone even under a normal stimulus, this leads to primary hypogonadism.

Causes of primary hypogonadism include:

Testicular atrophy may occur due to a lack of stimulus from the pituitary gland, which is defined as secondary hypogonadism. Causes may include:

T levels may drop below physiological ranges as you age, leading to symptoms and late-onset hypogonadism in some individuals. Obesity in men can also lead to low T levels.

However, studies suggest that the condition primarily affects total T levels rather than free T levels and is reversible with weight loss.

On the other hand, supraphysiological T levels in men are much rarer and can occur either due to hormone-producing tumors or anabolic steroid abuse.

In women, high T levels may occur as a consequence of various endocrinological problems such as:

Hyperinsulinemia is the most common cause, which leads to the development of conditions such as polycystic ovary syndrome (PCOS) and hyperthecosis.

According to studies, the excess of insulin stimulates T production in the ovaries and lowers the levels of serum proteins that normally bind and inactivate testosterone.

In addition, high T in women may also occur due to hormone-secreting adrenal tumors.

Low T in women usually occurs after menopause due to the declining function of the ovaries. It can also occur due to the surgical removal of the ovaries, pituitary dysfunction, or long-term contraceptive therapy.

Symptoms of low and high T

The most common symptoms of hypogonadism in men include chronic fatigue, low libido, depressed mood, loss of muscle mass, and increased body fat. 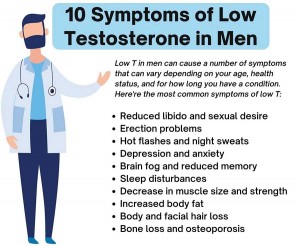 Patients often report falling asleep right after dinner due to exhaustion and extreme sleepiness. In severe cases, you may experience erectile dysfunction, loss of pubic and facial hair.

In addition, women with high T suffer from irregular or absent menstruation and infertility.

Women’s lack of T has more subtle and unspecific symptoms such as low libido, vaginal dryness, and depressed mood. These symptoms are also related to the decline of estrogen, which occurs during menopause.

The only way to know the exact cause of your symptoms is to visit a medical doctor, specifically an endocrinologist.

How to test T levels?

The initial diagnosis of high or low T in men or women begins with a doctor’s consultation involving medical history and physical exam. 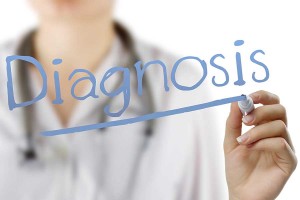 If your physician suspects that your complaints may be related to abnormalities in your T levels, then they will assign you specific tests.

According to the American Urological Association, low T in men is diagnosed after measuring T levels in serum. The test must be performed twice in two separate mornings to confirm the diagnosis.

If both measurements reveal total T levels under 300 ng/d and you have symptoms, then your doctor will diagnose you with hypogonadism.

There are also modern methods for testing T levels, such as at-home testosterone tests, which are growing in popularity thanks to their convenience and affordability. Yet, your doctor can’t diagnose you with low T using at-home tests for testosterone.

Such tests measure T levels in saliva rather than serum, which is not accurate enough according to research. Instead, you should visit a licensed laboratory to receive reliable testosterone testing.

Another method that’s growing in popularity is the ratio between the fingers of your hand.

Preliminary studies suggest that the ratio between the digits of your hand, more specifically your index and ring finger (2D:4D ratio), depends on your intrauterine exposure to testosterone and estrogen.

However, the 2D:4D ratio cannot be used for T levels evaluation in adults.

The American Association of Clinical Endocrinologists suggests that women should be diagnosed with high T only after thorough medical examinations and several hormonal tests. The tests include testosterone, luteinizing hormone, follicle-stimulating hormone, prolactin, insulin, and others.

Once your doctor has established the cause of your complaints, they will assign you appropriate treatment via medical prescription.

Currently, the most effective treatment for men with hypogonadism, according to the international guidelines, is the administration of exogenous testosterone. The aim of the therapy is to restore serum T levels within physiological limits. 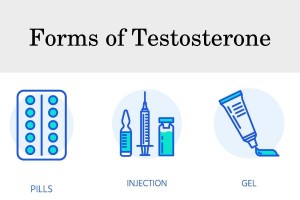 Physicians and most patients prefer testosterone injections as a method for TRT since it is the most affordable and reliable. It is easily dosed, which allows for faster correction of serum T levels and quicker symptom management.

TRT should be avoided by patients who plan to father children and desire to remain fertile. Also, there are several medical contraindications such as:

In women with high T, the most effective therapy depends on the underlying condition. Usually, it involves medication treatment alone or in combination with lifestyle changes.

The most commonly prescribed medication is low-dose estrogen-based contraceptives. Evidence suggests that they can help lower T levels in PCOS, CAH, and postmenopausal women.

Contraceptives with progestogens should be avoided since they can activate the androgen receptors and worsen the symptoms.

What to expect from treatment?

If you are receiving TRT, your doctor should monitor the safety and effectiveness of your treatment via regular checkups every 3-6 months and then annually after your first year of therapy.

The timeline of the first benefits depends on the form of TRT. Testosterone injections will improve libido, erectile function, and mood symptoms as soon as the 3rd week after starting treatment.

It takes at least 8-12 weeks until there is any improvement in body composition and physical performance, and at least 24 weeks for reduced risk of bone fractures.

TRT may lead to adverse reactions, so you should visit a qualified specialist. Your doctor will discuss the risks and benefits of TRT and offer you the most suitable treatment form.

Besides, they will ensure that you do not have any contraindications for TRT and will perform regular tests during your visits and correct your dosage if needed. By reducing the dose of TRT, side effects can be successfully avoided in most patients.

How to increase testosterone in men

Men looking to boost their T levels naturally may benefit from lifestyle changes such as improved sleep and increased physical activity.

However, most dietary supplements labeled as testosterone boosters are rather ineffective in increasing the natural T synthesis. In fact, research suggests that about 10% of the most popular ingredients in such supplements may actually reduce T levels.

Dehydroepiandrosterone (DHEA) is the only ingredient with solid scientific support as a testosterone booster, Yet, DHEA supplementation can lead to a significant increase in estrogen levels as well.

How to lower T levels in women

Women with high T levels due to PCOS may also benefit from lifestyle changes.